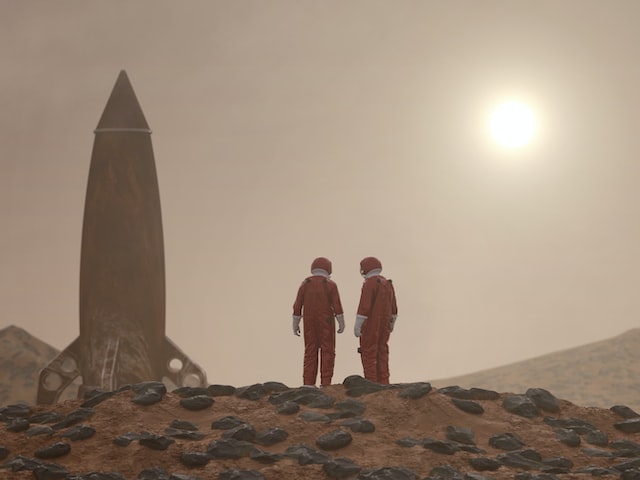 I am a little too young to have seen the old movies in the theater, although it must have been great!  The trailers that are often included in the DVDs are fascinating and fun to watch by themselves.

The setting of these movies portrays a simpler time.  The bad guys were obvious.  The victories in World War Two were still fresh in people’s minds and we could do anything, including defeating alien invaders.  Science was king, scientists were looked up to with respect, and science could solve almost any problem.  All this might not have been reality but in the make believe movies it sure seemed that way!

A Snapshot in Time

These movies from the fifties are a snapshot in time.  I like seeing the trendy cars of the day.  The fashions and social norms were certainly different.  Smoking was common, everything was “G” rated, and nobody missed anything.

Vision of the Future

It is interesting to see how the future was predicted.  Sometimes they were spot on and other times not even close.  One example was rocket ships almost always landed upright, with no parachutes.  Funny how we have come around to seeing landing like that with SpaceX!

The Story Matters More Than the Special Effects

Special effects were more difficult, with no computers and the modern technology we now take for granted.  They did pretty well with what they had to work with, even with often very small budgets.  They took the story very seriously, with the acting and dialog conveying more than the special effects.

These movies are just plain fun.  I’ve slowly acquired my collection, mostly of DVDs.  I have a laughable personal tradition I call “Sci Fi Saturday.”  Whenever possible I relax on a Saturday afternoon with one of my old movies.

If you need a place to start below are two of my favorites.  I’ve started a series on one of my other websites here.

There have been many imitators but the original is still the best.  The movie is based upon the 1898 novel by H.G.Wells.  Of course while the novel was based in Victorian England, the setting for the movie is early 1950s Southern California.

The movie begins with the crash of an alien craft near a small town and proceeds to the final battle in Los Angeles.  There are great battle scenes between the US military and the alien death rays, and of course the love interest between the hero scientist and the local girl.

The special effects are great for the time and hold up fairly well even today.  The Martian fighting machine models were originally made of copper.  One interesting note I read was that the props were used again in the 1960s film “Robinson Crusoe on Mars,” itself a fun movie.

Earth Versus the Flying Saucers (1956)

This is the classic 1950s Flying Saucer movie.  “ The Day the Earth Stood Still” used one flying saucer, but this movie has lots and they blow up all kinds of things!

The movie begins with newlyweds driving along when they are suddenly buzzed by a flying saucer.  The newlywed scientist heads up a troubled satellite program that is eventually attacked by the saucers.

A lot happens in between but the finale consists of an attack on Washington by many saucers and the scientist saving the day with a new weapon.

Special effects are decent and were done by Ray Harryhausen, a famous special effects master for several films.  He used stop-motion animation for the flying saucer scenes, and for the destruction of famous government buildings.

Photo by Mike Kiev on Unsplash